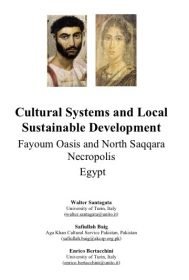 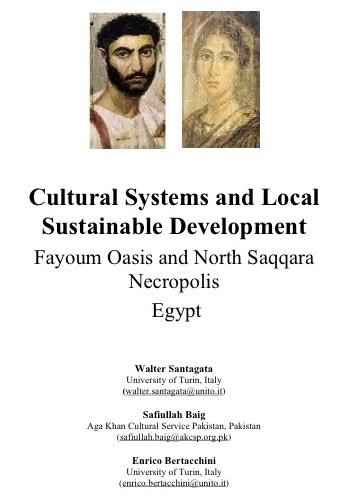 The aim of this report is to show how culture works in assisting local sustainable development, mainly in the tourist sector. The report will focus on two Egyptian case studies: that of North Saqqara Necropolis and that of Fayoum Oasis, which appears to be among the most promising places for cultural tourism development.

2. In most developing countries culture is a valuable social and economic resource. Along with nature, culture is emerging as a powerful stock of capital, often still idle. Therefore how to mobilize this cultural capital in generating income and creating jobs is the key point of a strategy to local development.

3. The first part of the report will analyse the role, functional and normative, of culture in the economic development. Special attention will be given on two points, namely the theory of cultural districts and the economics of cultural tourism. These points can be considered as the theoretical ground of the proposed actions for increasing the economic value of the North Saqqara Necropolis and its surroundings communities and the Fayoum Oasis.

4. In theoretical terms, a cultural district arises at the confluence of two phenomena: that of localization of economic activities and that of the peculiar or “idiosyncratic” nature of culture.

5. A cultural district cannot be established by an administrative act, yet it is the outcome of a long spontaneous process. Nevertheless it is not uncommon in the les developed countries to find concentrations of small firms producing goods and services within an organizational and industrial frame which are potential cultural district. Thus the problem becomes how to convey efficient institutions into the existing industrial clusters.

6. Regarding cultural tourism, it should be noted that along with its millennial culture tourism has always been a precious resource for Egypt and nowadays represents a potential pivot for country development. Tourism sector is a major contributor to the national economy, in terms of percentage of GDP and employment, amounting to 11,5% and 15%, respectively, for the 2004.

7. Dealing with cultural tourism three main categories should considered. Educational Tourism: i.e. visitors attracted by the fantastic expressions of the historical culture of the ancient Egyptian and Islamic civilization. Cultural Tourism: adventure tourism, eco- tourism, interest to local folklore, natural attractions, interaction with contemporary material culture (pottery, handicrafts, carpets) are examples of new patterns of tourism based on an integrated approach with local culture and communities. Recreational Tourism: a model based on visitors attracted by “leisure resources” such as Sinai and Red Sea seaside.