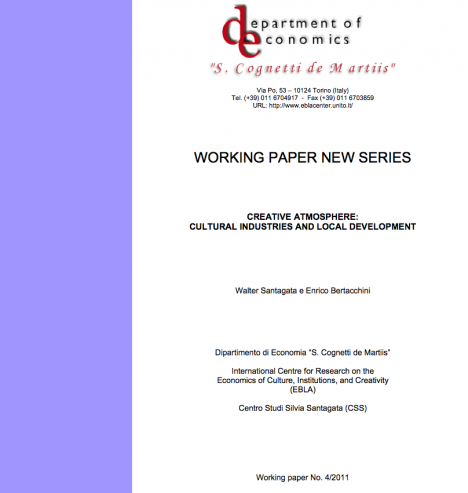 The aim of the paper is to develop an analytical framework for understanding and measuring the impact of cultural industries and creative activities in local development. Despite the great debate on the importance of cultural and creative industries in policy, academic and business circles, we still lack a grounded theoretical model to understand how these activities contributes to local development and how far enhancement of culture-based creativity may be linked to certain social and economic configurations in these industries. In order to better understand the role of cultural industries in local development we propose a novel framework, which tries to depict the main actors and structure of local systems of cultural production and under what conditions such systems are able to generate and express creative atmosphere. 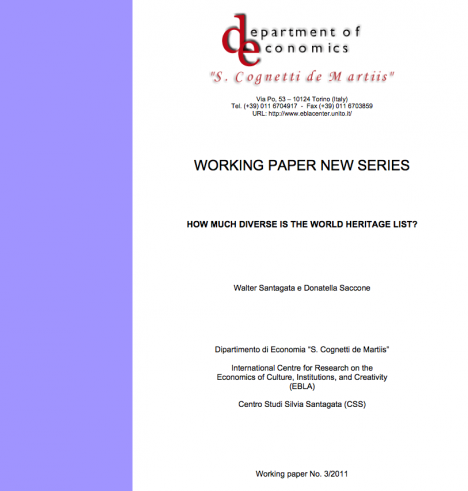 In 2005 UNESCO launched the Convention on the Protection and Promotion of the Diversity of Cultural Expressions. The aim of the Convention was to foster cultural diversity worldwide, having knowledge of the role of cultural diversity and cultural activities in promoting economic development. The World Heritage List can be considered a basic reference for the protection of cultural diversity as well. This requires that the properties in the List fairly represent the main expressions of the human activity, according to a harmonious development respectful of cultural diversity. The aim of the paper is twofold. First, by using the Shannon-Weaver’s index of diversity, we measure how much cultural diversity there has been in the World Heritage List since its beginning in 1978. In other words, we assess at which extent each culture is represented in the most important international system of cultural preservation and promotion. Second, we estimate the number of sites which guarantees the maximum level of cultural diversity and, then, we propose how to improve the World Heritage system by increasing the quality of the properties. Results show that just after the first two years of activity, the cultural diversity attained a good level and kept this level high until now. Notwithstanding this general conclusion, we estimate that there is room for a further improvement in the diversity by increasing the number of sites filling the cultural categories not still represented. It will result in 371 additional sites. Once attained the number of sites which guarantees the maximum of cultural diversity, the main policy left is to improve the World Heritage system by increasing the quality of the properties. The tool we select to launch this new strategy is a tournament model, according to which each property can be challenged by an external site belonging to the same cultural category. As a final result, there will be the substitution of lower-quality World Heritage properties with higher-quality properties. The model also takes into account risks related to political and lobby activities undermining the whole quality of the system and is used as a base to propose solutions.