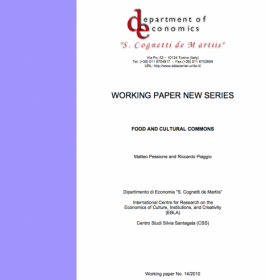 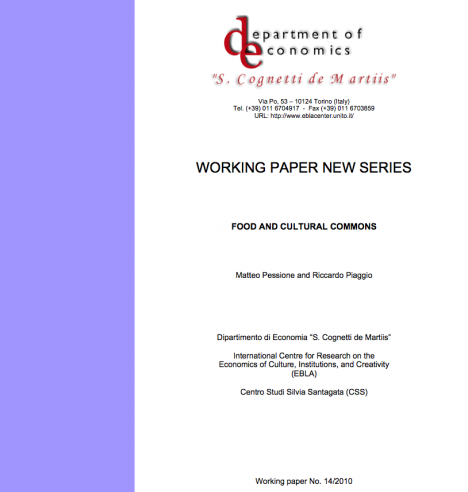 The idea of “Cultural Commons”, partly borrowed from the “open” model of “Creative Commons”, derives from the will to create a collective economy of knowledge by creatively and strategically cultivating heritage and memory. Unlike the tangible and intangible goods formally ratified by supranational organisations such as UNESCO, one can imagine the construction of “horizontal” networks, possibly territorial or local, that take defining elements of their own collective memory and transform them into goods and services with the contemporary paradigm of efficiency and sufficiency in production and consumption models. Therefore, whatever the Cultural Commons’ field of application, attention must be paid to the environment (materials, recycling, sustainable production techniques) and to culture as new values to be associated with the production of goods and services. From this perspective, it is fundamental to identify marketing and management planning tools which are capable of integrating narrative and cultural elements with a new market logic. The ability to formulate strategies which integrate the following into a network takes on vital importance:
– the communities that replace the exclusive nature of traditional consumers at whom traditional marketing strategies are aimed. Such communities are to be linked emotionally and conceptually to the values that the brand represents.
– the producers, bearers of tradition, innovation and productive skills. In light of the above, two elements in particular acquire significant value: social capital and intellectual capital. Cultural commons can become a key element in order to encourage the combining and exchange of knowledge among producers and communities of consumers through the implementation of two strategies: shift from marketing to “Societing”, the development of meta-organisations, intended as systems of systems capable of increasing consonance between producers and the marketplace. This paper will present an analysis of organic production and of products linked to the excellence of the territory of the Valle d’Aosta, as well as a case studyrelating to a project for the creation of a registered brand for the promotion and production of certain products linked to local traditions and identity.
Scarica