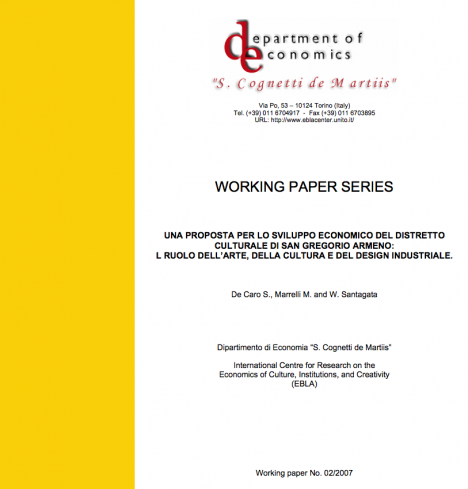 Proposal for the economic development of the cultural district of San Gregorio Armeno: the role of art, culture and of the industrial design

The popularity of the Neapolitan nativity scene goes beyond the famous street of the district of San Gregorio Armeno in the core of the city where since the 1800s, are made the small statues representing the nativity scene. In the concept of popularity we can analyze two aspects: reputation and culture. Reputation in this case is something that can evolve with time and it also depends on the actors of the district (artists, artisans, sellers). The Neapolitan tradition of the nativity scene is a good that belongs to the history of the place. If its reputation is decreasing because of lack of generational change or because of negative events, culture is an enduring good that a community uses as symbol of their identity. Culture and reputation are very close in the definition of the Neapolitan Nativity Scene and however, if on one side the tradition of the nativity scene of San Gregorio Armeno helped to consolidate the national and the international imagine of the district, on the other side it has to deal in the last years with a limited productive capacity. Potentiality and the cultural value of San Gregorio Armeno are in plain sight and there are no goals that can not be reached by a good local industrial initiative.
Scarica »