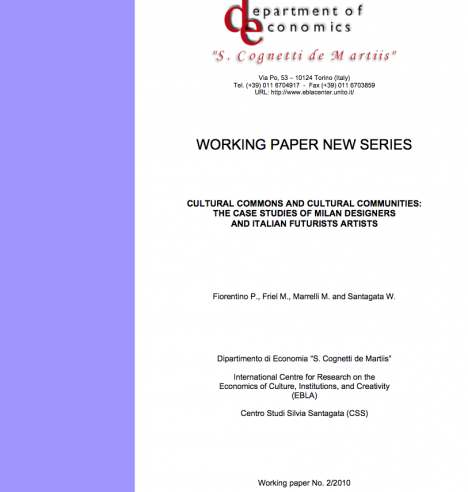 “Cultural Commons” refer to cultures located in time and space – either physical or virtual – and shared and expressed by a socially cohesive community. A Cultural Common is a system of intellectual resources available on a given geographical or virtual area. A Cultural Commons could be thought as the evolution of the more traditional concept of cultural district or cultural cluster. Ideas, creativity and styles of a community, traditional knowledge, credence, rites and customs, shared and participated productive techniques define a Cultural Commons. Some examples are: the image of a city, a local language, the brand of Barolo wine, an artistic movement, user generated contents on the web, traditional knowledge held by indigenous communities, and the creativity expressed by designers’ and artist’s communities. In this paper we will tackle the problem of Cultural Commons from two points of view; first of all we will propose a definition of what Cultural Commons are. From this descends that C.C. can show different evolutionary path, but at the same time that the presence of C.C. may have different effects on the “performance”/”success” of the individuals agents who are part of the community. We will study both the evolution and the “performance” with respect to two C.C.: the Milano Designers Community and the Futurism Artistic Movement.
Scarica »