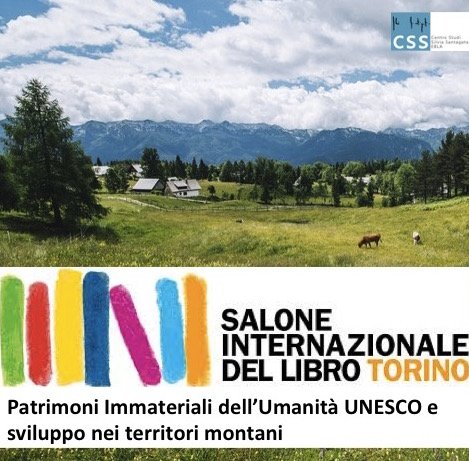 CSS-EBLA organize a session on “UNESCO Intangible Cultural Heritage and development in mountains regions” during the 2018 edition of the “Salone del Libro” of Turin.

The event is planned in collaboration with the municipality of Arcidosso (Tuscany), with whom there is an ongoing cooperation to implement actions for the promotion of intangible heritage, and Energeo Magazine. The seminar focuses on the knowledge of intangible cultural heritage, with a specific attention to heritage inscribed in the UNESCO registers, as resources to promote actions of sustainable development, also from an economic point of view, of territories and local communities, with references to mountains regions.

The seminar, that see the participation of Franco Bocchieri (Icomos Italia), Cassiano Luminati (coordinator of the international EU funded project AlpFoodway), Valter Marin (mayor of Sestriere), Jacopo Marini (mayor of Arcidosso), is planned the 14th May at 17.30 at the Piemonte Arena of the Salone del Libro di Torino.