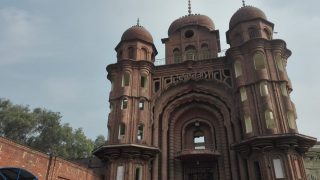 Fondazione Santagata and the Institute of Art and Culture, are appointed by the UNESCO Office in Lahore  for the preparation of an Integrated  Management Plan and Capacity Development for Sustainable Tourism of Sikh sites in Punjab, Pakistan.

Punjab, has a history which dates back 5000 to 7000 years in which the five rivers of the Punjab played a significant role. The Harappan or the Indus Valley civilization, considered to be a highly civilized society with a remarkable urban development and social order with no evidence found of violence or celebration of it, such as Harappa and Mohenjo Daro, is a tribute to the ingenuity of the ancestors of the Pakistani and Indian nations.

The Gurdwaras object of this project are located within the Rachna Doab, the area which falls between the River Ravi, Iravati and River Chenab, Asikni of the Rigveda and has great cultural significance. The remains of the Indus Valley civilization are still evidenced in some archeological mounds along the River Ravi and scattered in areas along the Chenab. Besides the ancient cities of Sialkot, Lahore, Harappa, Tulamba and Multan are remarkable evidence of the antiquity of this land with the layers of history embedded in the now bustling urban centers camouflaging its ancient past. Likewise, the people of this area are the inheritors of a rich Intangible Cultural Heritage which often harkens back to the original jangli tribes which inhabited the dense jungle areas of the Doaba.

The project “Development of an Integrated Site Management Plan and Capacity Development for Sustainable Tourism Development of selected Sikh Sites in Punjab”(4500401152) stems from the UNESCO sub-project of “Protection and Promotion of Cultural Heritage of Punjab through Sustainable Tourism and Economic Growth” (2018 – 2021) under the Punjab Tourism and Economic Growth of Punjab (PTEGP) project (2017-2022), a Government of Punjab project which is supported by the World Bank.

UNESCO appointed the Joint-Venture by Fondazione Santagata for the Economics of Culture and the Institute for  Art and Culture (Lahore), for the implementation of the work.

The aim of the project is to develop and ensure attractive, competitive and multifunctional spaces giving due consideration to the stakeholders, sometimes with conflicting needs and attitudes. The preparation and implementing of the Integrated Cultural Heritage Sustainable Management Plan will involve a large number of stakeholders and is expected to empower the local communities with tools and capacities for improving the economic dimension of development, through augmenting the understanding of the values associated with the sites and enhancing the cultural tourism potential.

Scope of the project is to contribute to the economic development of Punjab, Pakistan, through investing in an appropriate management of the site’s resources.

The project will generate:

– Capacity Development Plan for departments that are the site custodians and communities around the sitesfor improved management of site;

– Training workshops (at least one) in prioritized areas for site custodians and technical practitioners;

– Training workshops (at least three) for the local communities around the sites;

The boolket A common heritage_Understandig the Gurwaras was designed by Fondazione Santagata for raising awareness of the local communities.