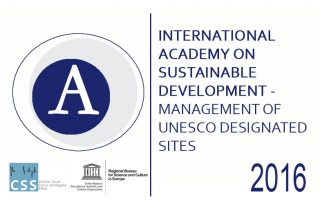 From December 1 to December 6 takes place in Turin the second edition of the “International Academy on Sustainable Development” a capacity building program ideated and implemented by the Study Centre Silvia Santagata – Ebla (CSS-Ebla) and the UNESCO Regional Bureau for Science and Culture in Europe (UNESCO Venice Office). it is addressed to site managers of territories with a UNESCO designation. The second edition of the Academy focuses on the following UNESCO designations: World Heritage, Man and the Biosphere and Creative Cities. The first edition has been attended by 42 site managers from 25 countries.

This program, the only one worldwide adopting this approach, aims to connect different experiences in the international context and  to build a global community of good practices. The 2016 edition, in particularly focuses on those territories with more than one UNESCO Recommendation, debating governance topics, territorial branding, fund raising and tourist promotion. The city of Turin with its three different designations, is taken as case study and classes take place at the UNITED NATIONS Campus managed by the International Labour Organization (ILO).