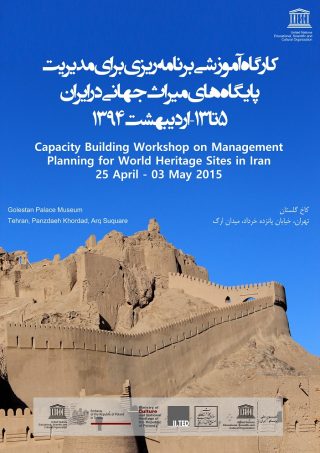 From April 25th to May 3rd 2015 took place at Golestan Palace, ancient home of Shah of Persia and at the moment museum but also one of the sites that are in the UNESCO World Heritage’s list, the first International workshop of capacity building on the sites of UNESCO’s management in Iran.
The event has been promoted by UNESCO’s office in Tehran and it has been organized by the International Institute on Territorial and Enviromental Dynamics (II.TED). It is also been supported by the polish Cultural Heritage ministry.
This meeting it has been attended by the seventeenth delegates of the Iranian sites of UNESCO. Among the others:
– the fortress of Arg-e Bam
– the historic bazar of Tabriz,
– Persepolis.
The meeting has been attended also by government officials that work on cultural heritage.
Alessio Re (CSS-EBLA) talked about how the drafts of UNESCO’s heritage are prepared for the local development. Among the International specialists who attended the workshop:
– Boguslaw Szmygin (Lublin, University of Technology – Poland / ICOMOS-Polska)
– Siavash Laghai (II.TED an FCSH – Universidade Nova de Lisboa – Portugal, workshop coordinator)
– Jukka Jokilehto (Univesity of Nova Gorica/ICCROM – Slovenia)
– Mohammad Hassan Talebian (ICHTO/Higher education centre for cultural heritage – Iran).