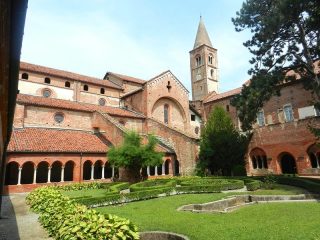 The Fondazione CRC and Fondazione Cassa di Risparmio di Saluzzo, in agreement with the Fondazione Ordine Mauriziano, identified the urgency and the need to enhance the complex of the Staffarda Abbey and village, in the Municipality of Revello, to relaunch it as a symbol of the territory and as tourist and cultural destination, entrusting the Fondazione Santagata to draw up a development plan of the entire complex.

The Staffarda Abbey was founded by Cistercian monks between 1122 and 1138, and is currently owned by Fondazione Ordine Mauriziano. Inside the complex there are, among the many works, a polyptych by Pasquale Oddone and a wooden group of the Crucifixion which dates back to the 16th century. The cloister, the refectory, the chapter house, the guesthouse are open to the public. Around the religious building there are the farmhouses and fields, owned by the Piedmont Region and managed by the Monviso Park.

The study aims at creating an integrated development plan for the monumental and environmental complex of the Staffarda Abbey, defining investment hypotheses in the sectors of culture, tourism, and entrepreneurial development, and the related economic impacts on the territory, in continuity with what has already been developed by Fondazione Santagata with the integrated development plan of the monumental and environmental complex of Stupinigi.